You are here: Home / Tutorials / Save Hours And Frustration With This Responsive Web Design Troubleshooting Tip

If you can master troubleshooting, you’ll significantly cut down on your overall development time, as well as the amount of time it takes to handle any issues that come up.

(The code examples in this article are specific to the Genesis Framework by StudioPress, for WordPress, but they can be applied to any website.)

When someone is troubleshooting an issue, most people immediately focus on fixing the problem. I’ll use an example that comes up fairly often on the StudioPress Genesis Forums. Most people will dive into the code, line by line trying to figure out what’s causing the problem. Many of the support requests include ‘I’ve been working on this all day and I can’t figure it out.’ Why? Because there’s a million things going on in your website code, and you’re trying to fix the problem without knowing where it is.

A better approach is to use the Process Of Elimination. Instead of trying to fix the issue right away, let’s eliminate the things for certain that are NOT related to the issue.

You have to narrow down the issue, and to do that you have to eliminate the things you know are not related to this issue.

Using the example above, it’s obvious that something is too wide, causing the horizontal scroll bars to appear. If you start looking through your code, going through the header, line by line, next the title-area, logo, widget area, and on and on what’s going to happen?

You might get lucky and find the issue. But often times, you’ll never find it. It’s too much code to go through manually. You’ll probably lose track of what you tested. What if the issue is both in the header AND footer? There’s just too many variables and troubleshooting this way is very challenging, time consuming and frustrating.

An Example of Process Of Elimination

Here’s an example of the basic Genesis Website structure:

Using the web inspector of your choice (we’ll use Firebug for Firebox), look at your source code. Let’s start eliminating things that we know are NOT causing the problem.


If not, again remove the “display: none;” and move on to the next element, and the next one until you narrow down the problem.

What If The Issue Is On More Than One Element?

In some cases, you have gone through all of the elements one by one and haven’t been able to make the horizontal scroll go away. It’s possible that the issue is common to more than one element.

For example, the issue could be with your <div class=”wrap”> element, which is common to your Header and Footer (and possibly more elements depending on your theme). In this case, I reverse the process by setting ALL elements to “display: none;” and then removing “display: none;” from each element one at a time.

Let’s say the issue is caused by the <div class=”wrap”> inside both the header and footer. Once I set “display: none;” to all three elements (header, div.site-inner and footer) I’ll have a blank page with no horizontal scroll bar.

Now that we know the issue is in the <header> and <footer>, let’s continue narrowing down the issue. The basic Genesis <header> structure may look like this (varies by theme):

Following the same process, we’ll set elements to “dispay: none;” one by one until we see where the issue is. Starting with <div class=“title-area”> and <aside class=“widget-area header-widget-area”>. If setting those to “display: none;” doesn’t eliminate the horizontal scroll bar, we can assume that they’re not the cause of the issue.


Next we’ll set <div class=“wrap”> to “display: none;”. We now see that the horizontal scroll bar goes away, which tells us there’s a problem with <div class=“wrap”>. Now we can determine the the .wrap has a width of 100% plus left and right margin of 5%. The total width of 110% is too wide, causing the horizontal scroll bars. Removing the 5% left and right margin, the width for .wrap is now 100% (affecting both header and footer) and we’ve resolved the issue.

In our example, we start with the major elements until we can identify which elements are causing the issue.

Once we’ve identified the major element/s that are responsible for the issue, we’ll use the same method to further narrow down the issue.

Finally when we’ve narrowed the issue down to a single element, we can look at that element and determine why it’s causing the issue. Once we’ve done that, we can fix the issue and celebrate with a nice, cold beer (or drink of your choice.

If you’ve found this troubleshooting tip helpful, sign up for our free newsletter to receive our tutorials by email: 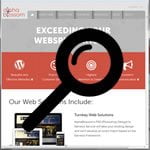 That's a tough deal to beat. Just enter your Name and Email and click "Sign Up". We'll never spam you and your info is private with us.